What is Cell Culture? 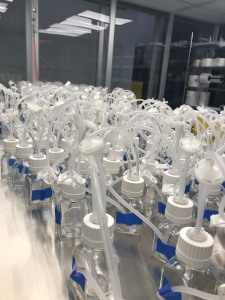 Cell culture is the growth of plant or animal cells in special containers and in controlled conditions. In the bio-pharmaceutical process space, cell culture is ubiquitous and used for a variety of applications, such as developing drugs, vaccines, bio-markers and in personalized medicine where we can study the effects of a particular treatment on a patient at an individual or group level. Cell culture is highly regarded for its reproducibility.

And because living cells can act as catalysts that facilitate reactions and generate molecules that are not possible or practical with synthetic chemistry.

Controlled conditions are vital in cell culture because the cells need an environment in which they can grow and thrive. In a lab, we can scale up cell counts by using cell culture media that is often composed of essential nutrients, proteins, salts, serums and other components to aid growth. The cell culture media can be combined with the cells in containers such as flasks or single-use media bottle assemblies. To maintain sterile conditions, single-use media bottles may be equipped with a 0.2 micron filter for air flow and TPE tubing for aseptic welding.

Cell expansion is commonly scaled up to a bioreactor that can have a volume capacity of thousands of liters.

How is Cell Culture Used in Bio-Process?

In bio-pharmaceutical process, the upstream process encompasses all steps needed to produce the product. Cell culturing is essentially the first step of bio-processing because these cells generate the main compound of interest. Nurturing and growing cells in media enables industries to mass-produce products. After the cells have developed to the stationary phase in a container such as a flask or single-use media bottle assembly, they are moved to bioreactors for fermentation as required to produce the target molecules. A typical bioreactor is equipped with sensors to monitor parameters such as pH, absorbance, and temperature to ensure ideal conditions. After the product is made, it needs to be refined and purified. This next series of steps preceding final filling and formulation is referred as downstream processing.